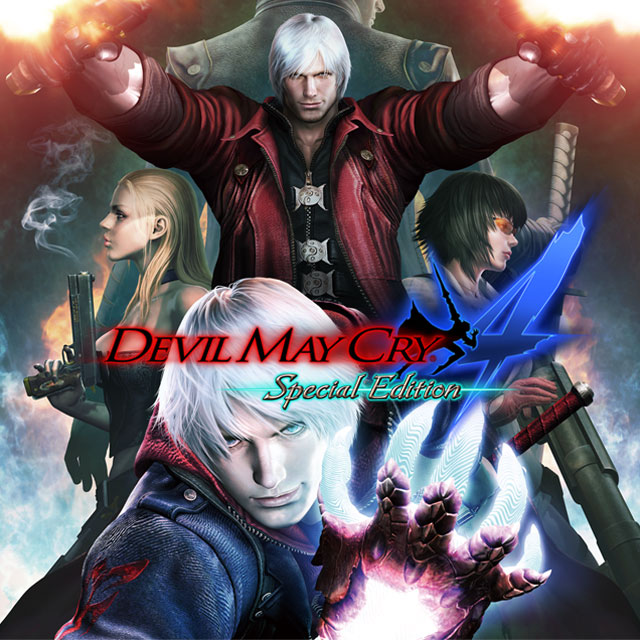 Get ready to slay swarms of enemies and topple towering demons, all while keeping it stylish !

Devil May Cry is a series of stylish action games that has sold over 13 million copies worldwide. The games have gained many loyal fans thanks to their deep action systems, stylish beatdowns, and memorable characters.
The director of the original Devil May Cry 4, Hideaki Itsuno, is at the helm once again for Devil May Cry 4 Special Edition, an expanded version of the game that's even better than the original fan favorite, which sold over 3 million copies.

Even if he's not the star of the show, that won't stop Dante's twin brother, Vergil, from stealing the spotlight! He arrives in DMC4 SE with both moves and graphics that have been upgraded from his last series appearance in Devil May Cry 3 Special Edition on the PS2.
Beginners can enjoy using a powerful character, while experts can push him to the limits to bring out the very best in stylish action!

Prepare to face your demons.

On the coast of a distant land lies the castle town of Fortuna.
It is here that the group known as the Order of the Sword practices a mysterious religion. They revere the demon warrior Sparda, who fought to protect humans, as their god, and are committed to the extermination of all other demons.
Nero, a young knight from the Order, is tasked with finding Dante, the mysterious assassin who murdered the head of the Order of the Sword. At the same time more demons begin to appear throughout the city. Could these events be linked...?
Nero will soon come to learn the motives behind Dante's appearance and the true intentions of the Order of the Sword...